Bangladesh has achieved remarkable economic and social progress in the last decade. By 2030, Bangladesh is anticipated to have the 24th-largest economy in the world. Bangladesh, which is in South Asia, is one of the most densely inhabited countries in the world and the eighth-most populated nation overall. It has the 41st largest economy by nominal GDP. Moreover, with strong revenue growth, Bangladesh recorded the greatest export earnings in the recent fiscal year 2021–2022. In the 2021-22 fiscal year, exports reached $52,082.66 million, which increased by more than 34%. Bangladesh exports 31 distinct product categories to more than 200 nations worldwide. Some of the country’s largest industries are regarded as the main drivers of the country’s GDP growth. Here are some of the industries in Bangladesh that have contributed significantly to the development of the nation.

For the past four years, Bangladesh’s exports have been primarily driven by the RMG and textile industries, which account for more than 80.6% of total exports contributing to $19.90 billion. No wonder why Bangladesh is the second largest RMG exporter. According to the Export Promotion Bureau (EPB), Bangladesh’s export of garments increased by 30.30% to $23.99 billion between July 2021 and January 2022. The country exports a large variety of clothing items to nations in many different geographical areas, including North America, Europe, Asia, and others. Woven and knitwear are the two main categories into which export goods may often be divided. Exports of knitwear increased by 32.89 % to $13.27 billion. And the export of woven clothing increased by 27.23% to $10.71 billion. China is the country that exports the most garments worldwide. And Bangladesh still continues to maintain its second position in RMG export.

Agriculture is one of the primary sectors of Bangladesh that is providing livelihood, employment, and GDP contribution. Although agriculture continues to be the third-largest contributor to the nation’s GDP, its share has declined over the past ten years, falling from 17% in 2010 to 12.92% in 2020. However, agriculture has been one industry that has tirelessly supported and contributed to the people and state of Bangladesh throughout the entirety of the COVID-19 pandemic. Since agriculture is the primary source of livelihood to 40% of the labor force, it is the largest sector in terms of employment. And Bangladesh’s earnings from exporting agricultural products reached the $1 billion mark for the first time during this period. The boost of agriculture and forestry sectors like crops and horticulture, animal farming, forest, and other related industries all have increased in FY 2020–21 amounting to 1.59%, 3.80%, and 6.12%, respectively. The supply of basic raw materials for industrial processing is also an indirect contribution from Bangladesh’s agriculture industry. As a result, many agro-processing firms today that produce sugar, tea, jute, fruit juice, or process spices, rely entirely on agriculture for their fundamental raw materials. 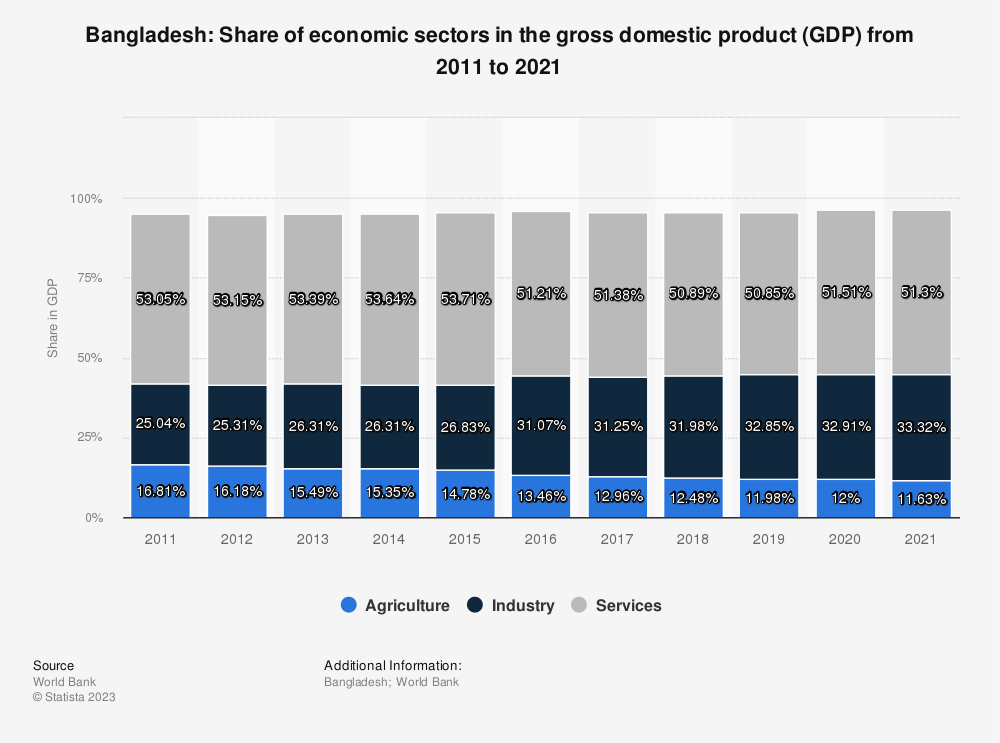 Bangladesh’s socioeconomic growth has been significantly influenced by the fishery industries. The country has a large region of wetlands with a variety of fishery resources. Due to the enormous export and economic possibilities, fish and fisheries are an essential aspect of Bangladesh. In the last 20 years, Bangladesh’s fish production has expanded substantially by over 400%. According to the fisheries department, the fishing industry provides more than one-fourth (26.37%) of the country’s agricultural GDP and 3.52% of the nation’s overall GDP, making it an important sector for the socio-economic growth of the nation. Moreover, the fishing sector accounts for 1.39% of the total national exports. During the fiscal year 2019–20, the nation produced around 4.503 million tonnes of fish. The country’s export of shrimp has especially seen a significant increase during the past six months, from July to December 2021.

In recent years, Bangladesh is becoming one of South Asia’s fastest expanding hubs for software exports and IT outsourcing. The ICT industry has consistently added to the nation’s GDP, which has led to the economy’s constant growth. The sector generated $1.3 billion in export revenue in FY 2020–21, holding a $1.4 billion market share in local market sales. So far, more than one million job opportunities have been created in Bangladesh by the IT/ITES sector, contributing 0.76% to the country’s overall GDP. Despite being a relatively minor sector in terms of size, the ICT industry has produced a surprising amount of employment and GDP throughout the years.

In the 2021–2022 fiscal year, Bangladesh’s GDP climbed from $416 billion to $465 billion, marking the most recent growth. Over the past ten years, Bangladesh has been rated among the fastest-growing economies worldwide. And these are some of the industries that contribute highly to the current GDP of the country. However, Bangladesh must foster an even more competitive business environment to generate jobs, employment opportunities, and export in order to fulfill its goal of reaching upper-middle-income status by 2031.

Story of HATIL: From Humble Beginning to Changing Furniture Industry

The Importance of the Chittagong Port in Bangladesh’s Economy

Journey and Operation of Eduman: How Are They Digitizing The Education Sector?

The Journey and Operation of Purple Care Limited